The student Constanza Paz Millán Medina obtained her Master of Science degree from the University of Chile, in a research led by Dr. Elie Poulin -director of the BASE Millennium Institute- as thesis director, and in a project carried out during the pandemic. 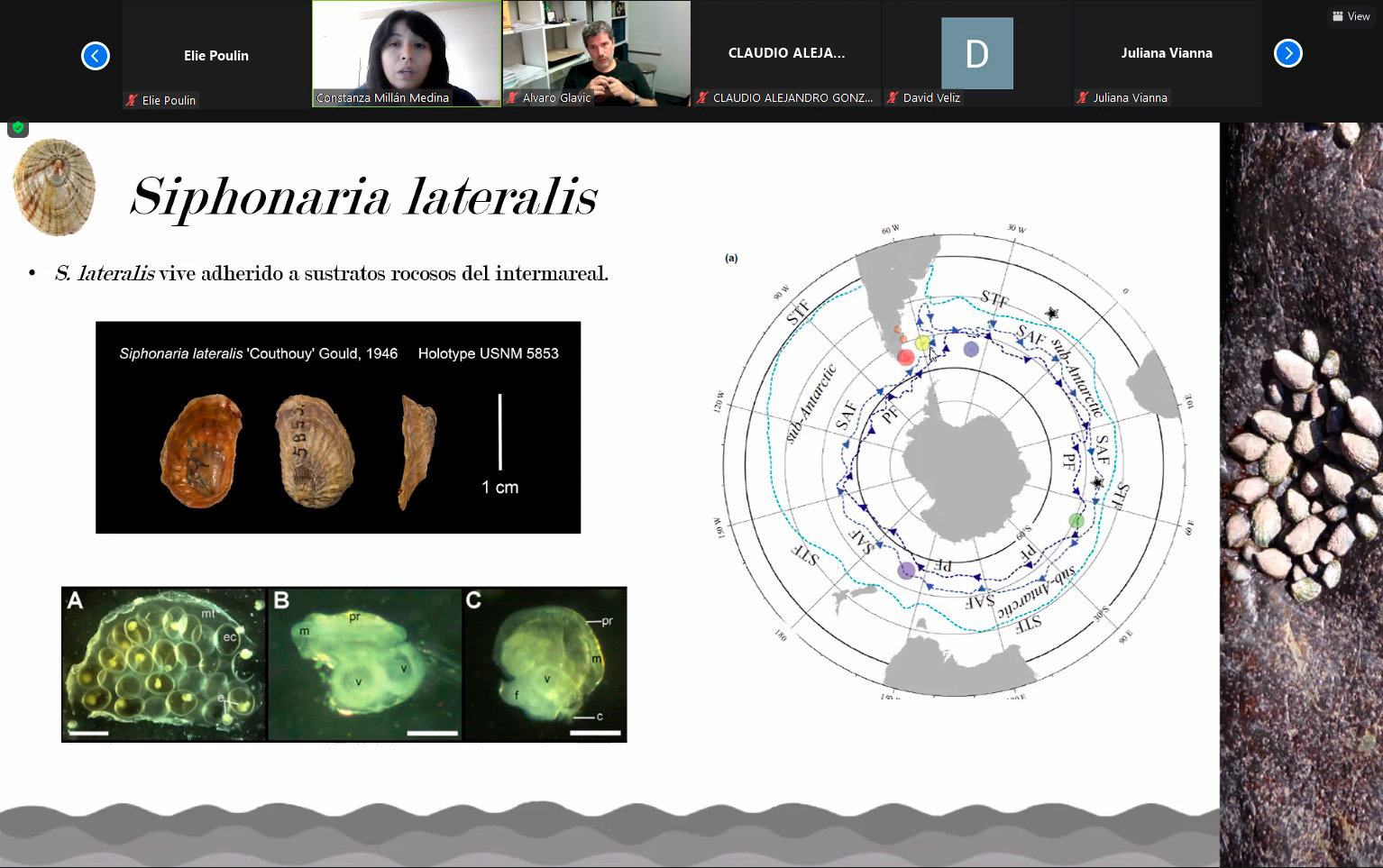 With the title “Patterns of genetic diversity and contemporary population structure in Siphonaria lateralis in the Southern Ocean”, the student Constanza Paz Millán Medina defended her thesis to qualify for the degree of Master of Science at the University of Chile, in a research that sought to evaluate the spatial genetic structure and the existence of contemporary gene flow of the limpet Siphonaria lateralis through SNP markers throughout its sub-Antarctic distribution, including populations from South America, Malvinas, South Georgia and the Kerguelen Islands. The study of these species is very relevant to understand the processes at the origin of the biogeography of the Southern Ocean, since it is only dispersed by means of large macroalgae, very abundant in sub-Antarctic areas.

The research was carried out within the framework of the Genomics Antarctic Biodiversity Ring (GAB) project and led by researchers from BASE Millennium Institute. Dr. Elie Poulin, as thesis director, and Dr. Nicolás Segovia and Dr. Claudio González-Wevar, as co-supervisors. In the defense ceremony, researchers Juliana Vianna and David Veliz participated as guest professors.

Millán highlighted that the species Siphonaria lateralis keeps a contemporary genetic connectivity between geographically distant locations of its distribution in the Southern Ocean, separated by thousands of kilometers, with the exception of the populations collected in the Malvinas Islands, which show to be genetically isolated and with a fairly endemic genetic diversity. At the same time, the SNP markers complement the history of Siphonaria lateralis previously described by traditional markers (DNA sequences).

The members of the evaluation commission highlighted the work of Millán Medina, considering the complexities of obtaining data, amid the COVID-19 pandemic. The thesis director, Elie Poulin, Ph.D. in Ecology and Evolution from University of Montpellier II, France, highlighted the research by pointing out that “the dispersal transport by rafting of gene flow is a very little explored area”, while Dr. Nicolás Segovia highlighted the level of research and the contribution to the polar discipline. Finally, Dr. Claudio González-Wevar joined in the congratulations and pointed out that the “idea that arises with traditional markers, which is added to a next stage, and is answering fundamental questions that we are asking to ourselves.”

Finally, the new Master in Sciences from the University of Chile, Constanza Paz Millán Medina, thanked her research tutors and reflected on the challenges that persist in the white continent: “The future does not look very auspicious for Antarctica under certain climate change models. Something that could be invasive, with high resilience to climatic conditions, could be able to enter all these subantarctic islands.”