Punta Arenas declaration: A pole of knowledge for sustainable development in the southernmost region of the planet

Led by the Ministry of Science and the Regional Government of Magallanes and Chilean Antarctica, 37 institutions from the public and private sectors, academia, research and international initiatives signed the document that formalizes their commitment to improve the lives of the inhabitants of the area, the country and the world, through research and innovation. 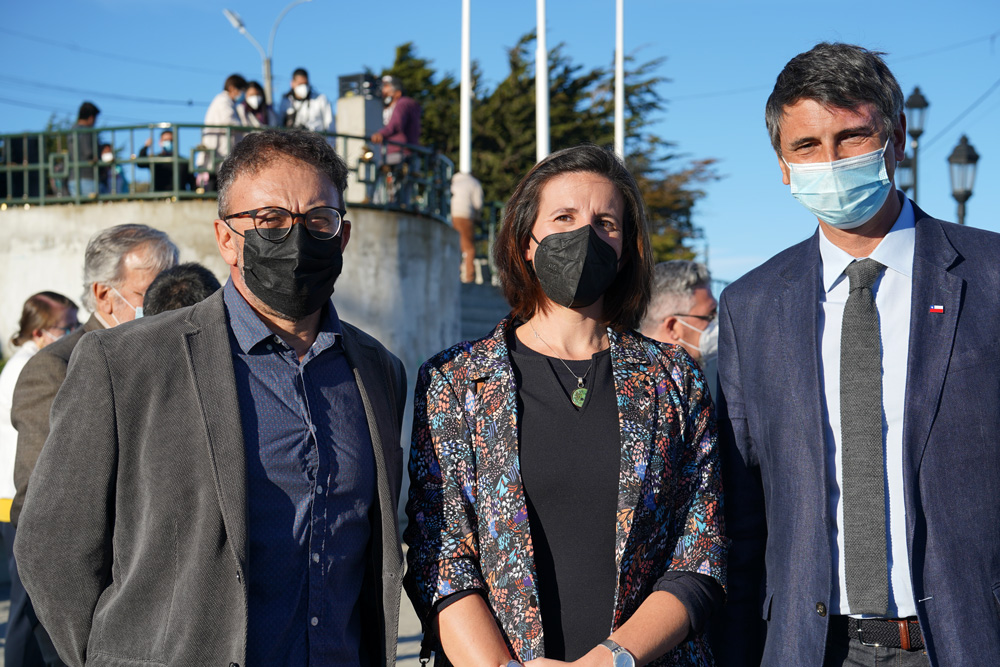 The objective of the declaration signed from Cerro de la Cruz viewpoint in Punta Arenas by 37 representatives of the public and private sector, academia, research, civil society and international initiatives, is the commitment to work collaboratively to consolidate the southernmost zone of Chile as a pole of sustainable development based on research and knowledge.

It is a declaration led by the Minister of Science, Andrés Couve, and the Regional Governor of Magallanes and Chilean Antarctica, Jorge Flies, which reinforces the commitment of different institutions “with the role of scientific and technological knowledge in the creation of value and as an engine of development, and to work decisively and collaboratively to turn the southern region into a pole that contributes, through research and innovation, to improving the quality of life of its inhabitants, the country and the world, building a country fully incorporated into the knowledge society”.

“I want to thank and acknowledge the tenacious work of all those who live in the southern cities of Chile, people who have worked tirelessly to build the Aysén and Magallanes region. Our recognition for their dedication for generations”, said Minister Couve at the beginning. As explained by the authority, this declaration seeks to take advantage of the opportunities given by the territory, especially around biodiversity, ecosystems, climate change and Antarctic research issues and the emphasis that researchers have given to the area of ​​paleontology, “a discipline that tells us to understand the past and through it, to understand the future”, explained Minister Couve.

“We appreciate the efforts of all institutions that today join this commitment, which is based on shared principles and values, such as sustainability, gender equity, transparency and national and international public or private collaboration,” added the secretary of State to highlight the commitment of different representatives who signed the declaration such as the Minister of Energy Juan Carlos Jobet, the undersecretary of military forces Alfonso Vargas; the Mayor of Punta Arenas Claudio Radonich, and the executive director of Imagen Chile, Constanza Cea.

Meanwhile, the regional governor stressed that “ Magallanes region will be a world science territory. The strategic alliance with the Ministry of Science has allowed us to identify, deepen and advance throughout the macrozone, which is united in what we want to do for the world with applied and basic science. The effort that is being made will position Chile and will allow us to look at Antarctica, the subantarctic area and our archipelagos to effectively answer questions as important as climate change or our biological and technical possibilities for new breakthroughs” .

“As the Ministry of Energy, we are committed to the sustainable development of the southern zone through a determined boost for clean energy and green hydrogen. This energy source will position the Patagonian winds at the heart of the global fight against climate change. We are sure that energy innovation, research and development in clean technologies will be the building blocks of the southern energy transition”, declared Minister Juan Carlos Jobet.

For Pamela Santibañez,  Seremi of Science of the Southern Macrozone, “this declaration is based on a common objective, to consolidate the regions of Aysén and Magallanes into a scientific and technological pole, understanding the magnitude of the information and knowledge available, which we seek to release in a collaborative way to face the planetary challenges to which we are exposed as humanity”.

“At Imagen de Chile we seek to position the country based on the talent of Chileans, which is what distinguishes us from the rest of the world. The world already knows Chile for its landscapes, we want them to know us for our creativity and ability to seek solutions to global problems. That is why what is happening in Magallanes is so relevant, it is aligned with establishing an identity, which has to do with exploring, going further, seeking solutions that integrate this exceptional territory that we have with talent and the ability to connect with needs that are outside and with the hope of finding answers”, assured Constanza Cea, the executive director of Imagen de Chile.

According to the words of the authorities, the specific actions and evaluation mechanisms that emanate from the declaration will be related to three axes: “I+D+i”; “People” and “Region”.

The first refers to the promotion and incorporation of research, development and innovation activities in the work of the participants; the second seeks to promote actions that benefit people, including the distribution of knowledge, equity and employability; while the latter focuses on internationally promoting the specific characteristics of the southern regions of the country, as well as raising awareness regarding the care of their seas, land and ice.

Signatories of the Declaration of Punta Arenas: